Well after almost five years since I've posted my one and only blog post for my firearms blog. Since it has been so long I've decided to discuss a topic that most gun nuts even to this day still debate. This is of course the debate between the Avtomat Kalashnikova Model 1947 and the Rifle, Caliber 5.56mm, M16, better known as the AK-47 and the M16 respectively. This debate has been over a half a century in the making. First we'll start off with the history of both the rifles. 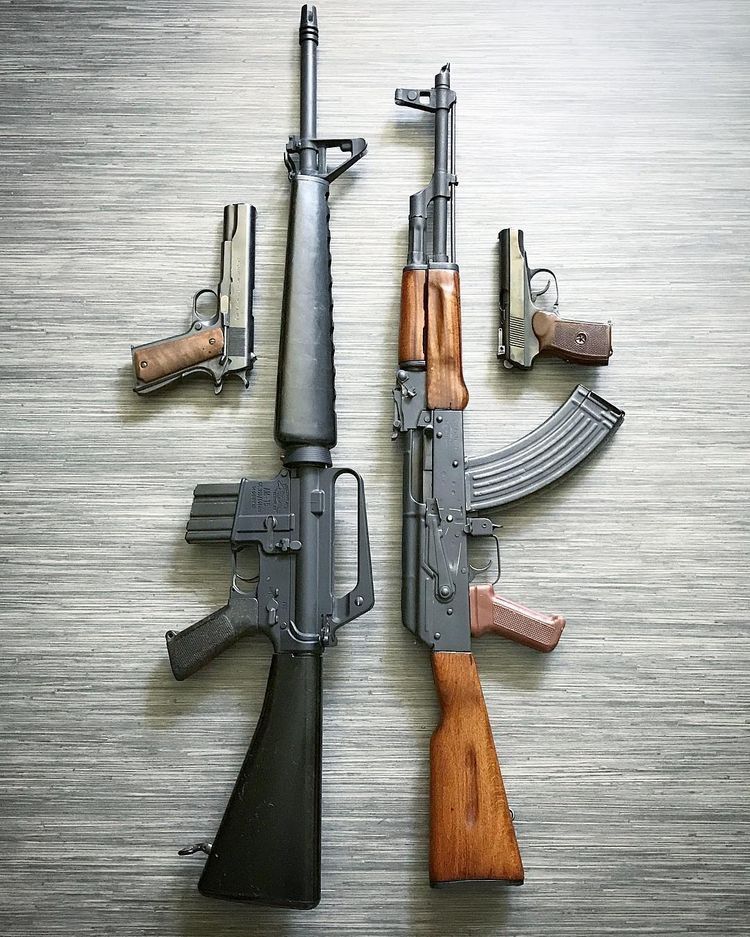 The History of the AK-47 and M16​
We'll first cover the AK-47 and to do that we must go back to the Second World War and a German invention. I am of course talking about the Sturmgewehr-44 developed by the famed weapon designer Hugo Schmeisser. The STG-44 was heavily deployed against the Soviet Union where, even with their superior numbers, Soviet soldiers were often faced with withering firepower coming from the Germans. The Soviets eventually were able to capture some STG-44's and set about developing their own select-fire rifle chambered in a intermediate cartridge. They developed the 7.62x39mm cartridge which was first used in the SKS and RPD.
The designer of the rifle that would be adopted was Mikhail Kaslahnikov, a Soviet tank sergeant. While he was recovering from a wound sustained in the battle of Bryansk he started the design process that would eventually develop into the AK-47. The development took a few years but by 1947 the weapon was finally finished, hence its numerical designation. From then on the AK-47 and it's derivatives would go on to serve the Soviet and Russian Army to this day.
Now we'll cover the M-16 and once again we must go back to the Second World War. During the War the United States fielded a wide variety of firearms. This meant that their were a pretty good variety of ammo in a unit. For example a U.S. infantry platoon might consist of riflemen with M1 Garand or M1 Carbines, both of which used different ammo, officers and NCO's with M1 Thompson's or M3 SMG's and automatic riflemen with M1918 BAR's. After the war American strategists looked at this and saw a logistics problem and sought to fix it. This fix resulted in the M14.
The M14 was based upon the venerable M1 Garand, a weapon that General George S. Patton called the greatest battle implement ever devised. The M14 was essentially the M1 Garand upgraded, chambered in 7.62x51mm and designed to feed from 20-round magazines. The M14's service history would be cut short though when it was found to be ineffective during the initial U.S. deployment to Vietnam.
The M14 would eventually be replaced by one of the subjects of this blog, the M16. After the ineffectiveness of the M14 was revealed, which had been in development and had actually been in the running to be the new service rifle instead of the M14 though it was blocked by the Army, the M16 was