Strengths:
(+) Strong in the Force: Much like the Vahla or the Sith Purebloods, every member of the Cernun species has Force Sensitivity to some degree.
(+) Empathetic: Similar to a Twi'lek or Nautolan's lekku/head tails, a Cernun's tail has the ability to sense pheromones and emotions.
(+) Strong lungs: Living on what is largely a thin-atmosphered planet, the Cernun have developed strong lungs. They are able to hold their breath for long periods of time.

Weaknesses:
(-) Pheromones: Despite having pheromones of their own, the Cernun did not evolve resistance to those of other species, relying on them too much for communication. Basically, they're at the mercy of any Zeltron, Falleen, etc. that they can't overwhelm with their own scents.
(-) Tails are Important: Besides the aesthetic loss of damage to their tails, Cernun also use their tails to keep balance. The loss of one's tail will often send a Cernun mentally and literally reeling as they have to retrain themselves to function and fight without one.
(-) No night vision: It's typical to see Cernuns walking around with lightweight night-vision goggles, or even flashlights, as early as sunset.
(-) Barren - Although every Cernun is able to produce children, only one female in every hundred or so seems to actually get pregnant. As a result, wars take heavier tolls on the Cernun than other races. However, this also allows the population to remain relatively steady in times of prosperity, with rapid colonization not necessarily an immediate issue.
Distinctions: Although specifics vary, all Cernun have horns and a tail.
Average Lifespan: 500 years (Xaris), 300 years (Vadum aand Sandu)
Subspecies:
Sandu: The most common of the Cernun subspecies, the Sandu are easily recognizable by the prominent horns that sweep out from the front or sides of their heads, as well as thicker tails than the other species. They are general rougher-skinned than members of the other two subspecies, but there are plenty of exceptions. Their pheromones are weaker than either of the other species, yet are usually more than enough to overwhelm many people. Vadum: Relatively hard to find in cities, but easily found in large numbers in the small towns and villages that dot the forests and canyons of Cernunnos, the Vadum are recognizable by their elaborate (and often decorated) horns. They're typically much taller than a Xaris or Sandu, but lack a long enough tail to have the same graceful balance as the other two subspecies. Out of the three species, they have the strongest pheromones, but very rarely venture out of their settlements for long enough to wreak they havoc they are capable of. Xaris: The rarest of the Cernun subspecies, with a total population of about six thousand. They make up the royal class of Cernun space, and often interbreed with Sandu and Vadum to maintain population. Their tails are thinner and furred, and their horns are less prominent. They have slightly less pheromone strength than the Vadum, but still tend to be able to mess with the Sandu enough to hold their loyalty and even affection. 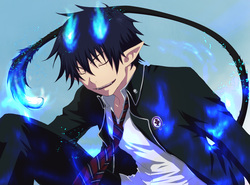 Estimated Population: Common on several worlds of the Rishi Maze, practically nonexistent outside.
Diet: Can eat nearly anything, up to and including some kinds of reptile venom. However, most forms of metal are still toxic. A typical Cernun meal is composed of lots of meat and sweets. Lots of spice is present in the meat, with peppers being a staple in the diet of even the poorest Cernun. Starchy noodles, or some kind of sweetbread, are common as well.

Communication: Verbal, Telepathic, Pheromones
Culture:
As a race, Cernun have several traditions that all must follow, or risk being outcast:

- Blood Swords: Every family has several swords made for their children. The Blood Sword is seen as part of one's being, and as a person's first and dearest possession. When a Cernun dies, their sword may be buried with their body, or be bequeathed to their closest relative. It is not unheard of for a well-trained warrior to wield as many as four or five swords at once. The most revered Cernun warrior of all time, the Apocalypse Lord, wielded nine Blood Swords from his dead ancestors.
Besides being a symbolic piece of an individual's soul, they are definitely forged for combat. The majority are hardened enough to block a lightsaber, and even temporary replacements are usually sharp and hard enough to cut through durasteel, if not as immediately. Skilled metalworkers are some of the richest people on the three planets ruled by the Cernun, and often achieve positions of power in local government.
It is considered

- Revelry: Despite having many
Technology level: Spaceflight, holos, and the general trappings of a modern society. They don't have lightsaber crystals, or blasters, but they use highly destructive slug-guns and flak cannons, as well as high-end explosives.
General behavior:
History: WIP
Notable Player-Characters: Cobalt
Intent: To flesh out a sentient culture for the mostly unknown Rishi Maze.