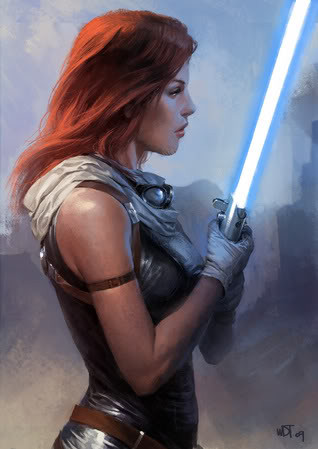 Weaknesses:
Overall physical power and the inability to use telekinesis

Biography:
As a child Eeli was submitted to the Jedi Academy by her parents after she began lifting objects through telekinesis. However, as she began her training her ability in telekinesis dropped significantly, to the point that even levitating singular individual objects proved to be extremely difficult. As a result of this Eeli developed other Force techniques that seemingly overrode her telekinetic powers, such as Force Sense, Force Speed, and Battle Meditation. A definitive prodigy in Force Sense, Eeli steeped herself in military tactics, strategy, and formations. Following this line of study she began to develop battle meditation, with which she began to combine with Force Sense. Whilst still new to this combination, Eeli has at times been able to demonstrate an effective, if sparse, use of this technique.

To compensate for the lack of telekinetics that came so easily to those around her, Eeli devoted serious study on Force Speed with the goal of use evasion and dodging to counter-telekinetics. Alongside her studies of Force Speed, Eeli undertook strong training in various lightsaber forms such as: Form II Makashi, Form III Soresu, and Form IV Ataru. Privately Eeli studies Form VII Juyo as her belief is that any worthwhile opponent would research her preferences, and therein would not expect a chaotic, furious and unpredictable style of combat. Whilst far from a master or skilled practitioner, Juyo is Eeliâ€™s wild card reserved only for a do or die moment.

Eeli is young, vibrant, and secretly introvert. Whilst an out-going personality is most-commonly seen, her mind is analytical and observant. Her need to validate her intelligence and to gain prestige is both a gift and a curse.