Round the Mulberry Bush 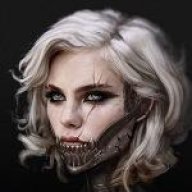 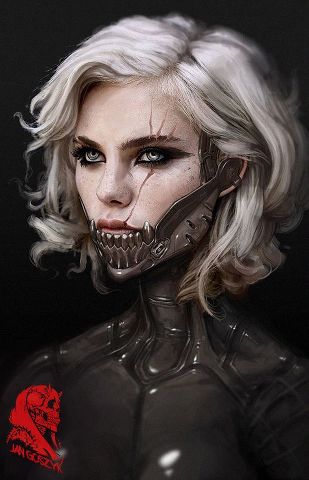 APPEARANCE:
Scars aside, Hush is quite an attractive young woman. She's a few pounds shy of a healthy weight but not to the point of being skeletal. She tends to wear a bodysuit, the easier to get in and out of her space-suit. Also fewer fashion decisions necessary.

She is however, very heavily scarred. Both her eyes have had to be replaced with cybernetics, the scars of the wounds that made this a necessity very evident. Her lower jaw also took extreme damage, being protected and reinforced by a metal exoskeleton. She also has cybernetic audio implants as her eardrums were permanently damaged. Beneath her bodysuits, scars cover much of her torso and back. A person with medical expertise might correctly identify them as a mixture of explosive shrapnel and knife wounds.

Her prematurely white hair is kept at about chin length, and its natural waviness helps hide the fact that she often forgets to wash or brush it.

BIOGRAPHY:
Not a lot of known is about Hush, primarily because she is not a dependable narrator. What is largely accepted is that at some point in her life after reaching adult growth, she survived a brutal attack. It left her blind, deaf and clinging to life. With cybernetic help, she's reached a of standard of living, however horrific as they were, the physical damage was the least detrimental to Hush.

Hush is, to put it kindly, a few sandwiches shorts of a picnic. She's left with generalized anxiety and PTSD, sometimes leading to panic attacks. She also doesn't sleep. Not in the cute, I'm so quirky, I need my seven cafs and a power nap, but in the I haven't slept for a week and am now hallucinating with a very tenuous grip on reality sort of way. Which is where things gt interesting. Hush is in fact strongly force sensitive. Her area of expertise, if she'd ever bothered to master it, would most definitely be illusions. When she starts hallucinating, anyone without some form of protection in her general vicinity gets to share the trip, and sometimes it is very, very bad indeed.

As such, she generally stays alone on her ship, with her droids for company, making a living salvaging vessels most people can't be bothered with.

SHIP:
THIS SHIP WHICH I HAVE TOTALLY SUBBED (no I haven't I swear I will). Her name is Talulah.