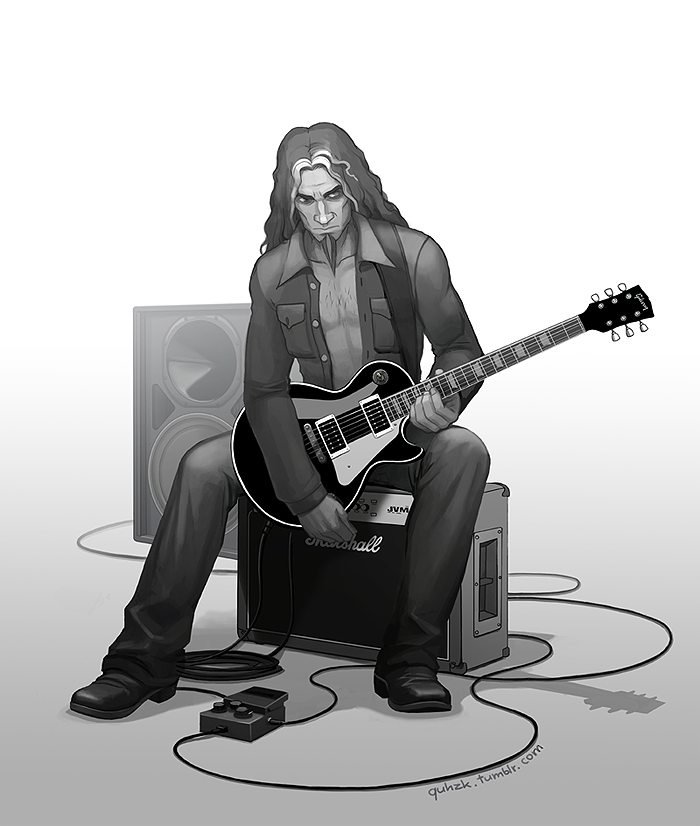 BIOGRAPHY: Born in the slums of Balmorra, Fenrir grew up into a violent and dangerous lifestyle. Forced into gang-life to survive, Fenrir took a liking to heavy and fast-paced music from a fellow gang member who had actually formed a band that played the same music they listened to, although they weren't very good, but constantly tried to mimic the sound. Fenrir was given the opportunity to join the band, and started practicing playing a modified Quetarra that lacked the extra two strings, and became rather skilled at playing after a few months of practice with the band. When the five-member band became good enough to develop their own demo tape they all came together to come up with a name for their band, and eventually settled on 'Goregrind', which Fenrir actually came up with.

Goregrind contacted an off-world record company who decided to sponsor the budding band after they listened to the dark and brutal-themed demo tape, which perfectly summed up the feelings and tone of the Gulag plague that had devastated the Galaxy. They played a few gigs, got relatively popular on their homeworld of Balmorra and the surrounding planets, but eventually Fenrir was kicked out of the band due to personal issues with the other bandmates and left to pursue other venues. He eventually formed another band called 'Wrathful Delights', which he was both the lead guitarist and lead vocalist, and signed on with the same record company his original band sign up with. Goregrind broke up shortly after, due to Fenrir copywriting the name and forcing the band to either change the name or disband.

The popularity of Wrathful Delights grew quickly with the fall of Goregrind, and they had found a decent career performing various gigs across what quickly became Republic and Protectorate space, but tensions soon would led to the band splitting up which led to a scuffle between Fenrir and another member, ending with Fenrir loosing vision in his left eye. From there on he formed multiple bands that all ended in failure after a few good years of running before disbanding or him being booted, such as Intestinal Crank, Financially Fethed, Gangagar, Eldeleel-Alele, Gognog Mug Alugdug, Fethface Academy, Sausage Assassin, Smugly Dismissed, Operation 'Karkface', and the Artist Formally Known as Goregrind. Now he wanders the galaxy on the fortune of his past successes and failures, looking for another group of like-minded people to make the next big thing.