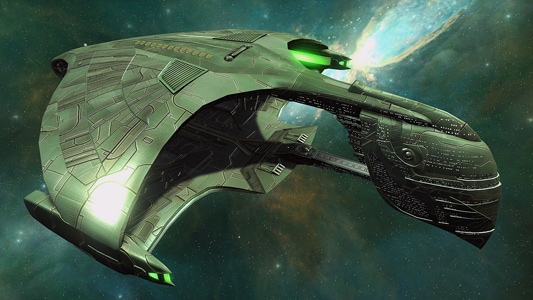 Designed as the transport class vessel for the latest generation of Mandalorian fast-attack capable craft, the Raptor-class packs some advanced technology into an elegant and durable package. Built tough with multiple shields and armour, she is well able to enter a battle zone and deliver her Mandalorians to their targets using advanced Force Cylinder technology, abrogating the need for drop pods or shuttles.

Her forward section is packed with the main bridge, weapons controls, and deck after deck of barracks, armoury and troop holds, with a small hangar. The rest of the vessel is given over to sensors, engines, the weapons, and the power generation and force cylinder arrays. The Raptor class is able to swoop in over a target area, utilizing her forward weapons to make a hole, and deploy large numbers of troops directly into a battle zone via Force Cylinder, while protected from enemy fire by her powerful shields.

Packed with state of the art power generation and engine technologies, her fast hyperdrive propels her across space at a speed capable of matching the other vessels in the Mandalorian fast-attack fleet. Though she is relatively slow and ponderous at sublight, she is well protected, and able to absorb enemy fire as she carried out her primary mission. When delivering Mando'ade to battle, or recovering them, the Raptor class does not kneel.