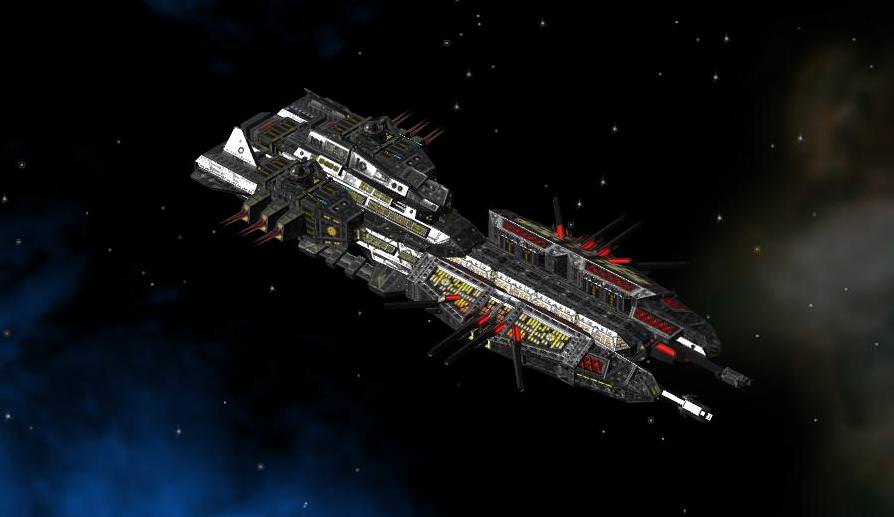 Designed to act as both command vessel and the lead strike craft in a Mandalorian assault, the Indomitable arrived like the proverbial hammer of Mandalore. With heavy armor and strong shields she can take a pounding, with heavy armaments capable of punching it out at close range with damn near anything. In addition to her powerful shields and armaments, her state of the art hyperdrive makes her one of the fastest big ships in the galaxy. Like the Mandalore-class battlecruiser, Indomitable has a thick Mandalorian Steel hull weaved with Silicar, capable of taking wicked punishment.

Her weapons systems and power systems are heavily shielded to prevent overloads during operation and resist overheating, utilziling materials such as Hadrium and Dallorian alloy, as well as Agrinium to keep the nasty radiation where it should stay. The ship itself isn't a fast vessel, even for its size class.

Close combat is where Indomitable excels. She has powerful forward guns, perfect for knife fighting range, as well as multiple dorsal and ventral turrets. To port and starboard, she has a broadside of deck guns, particle beams, and to top it off, a ventrally mounted gravitic cannon. The intent is Indomitable close with enemy capital ships with her forward armaments, then swing port or starboard to unleash a devastating followup broadside.

The pride of Mandalorian design and engineering, this is the first of a new era of Mandalorian design, built not just to protect a burgeoning people, slowly rising from the dust, but to enforce the will of that people, near and far. Like the people who build it, the Mando'ade; Indomitable embodies the Mandalorian Empire's spirit. The mighty don't kneel.

If you'll link us to the purchase posts for the SIC-32 and Pit Horr HVCs, we should be all set.

Character Bio
[member="Kaine Australis"], I'm aware of this being used for the SIC-32s, but that post doesn't mention the Pit Horrors HVCs.

You'll need to remove one of those as per this weakness in the subs: