Introduction to the Hugos and Puppygate (And Why You Might Care)

The Hugo Awards are by far the world's most prestigious awards for science fiction and fantasy literature, with the nebulas a not-terribly-close second. Every year, a nomination list is voted into existence by anyone who's bought a membership to WorldCon (or a supporting membership, meaning they likely won't be attending but still want a vote). Hundreds or thousands of eligible novels, and tens of thousands of other eligible works, are published every year, so even being nominated is a huge honor, and the vote is spread out enough that very slim majorities often decide what gets on the nomination list, to say nothing of what eventually wins. George R.R. Martin once lost a Hugo by one vote.

Anyone who follows political structures at all has probably guessed the implication: that even a small minority voting as a bloc can have a disproportionate impact on a landscape like that.

This year, a group of writers and fans set out to do exactly that. And it worked. A large part of the nomination list was forced through by a highly motivated minority.

I won't attempt to do a play-by-play here, because the dust hasn't quite settled yet, but what I will do is give two lists. One's a thumbnail sketch of major terms and players, and the other is a set of links from both sides for further reading. If you dig into this as a writer, I guarantee you'll get mad, disappointed, disgusted or apathetic. You're going to find people you respect and people you think are worthless -- and you're going to find them on both sides. You're going to see major news outlets make serious mistakes. You're going to see a lot of ugliness, some of it from extremely popular writers and editors. But I've spent the past four days reviewing this, and I firmly believe I'm better off for having looked into it myself rather than trust the first article I came across. If this stuff interests you, don't take my word for it - look into it yourself. Part 2 is alllll links.


Part 1: People and Issues in a Nutshell

Sad Puppies: A campaign, now in its third year, whose fundamental tenets run something like 'Hugo nominations lists are overrun by boring literary message fiction that nobody reads'. Sad Puppies 1 was something of a joke, on purpose. Sad Puppies 2 had a bit of an impact. This year was Sad Puppies 3, and in combination with Rabid Puppies, it got things moving. A lot. Major names include Larry Correia and Brad Torgerson, both right-wing American authors but not bad guys. Sad Puppies 3 issued a suggested 'slate' of 'overlooked' materials, several of which wound up on the final ballot.

Rabid Puppies: A campaign concurrent with Sad Puppies 3. Major names include John C. Wright, a pretty blatant homophobe, and Theodore Beale/Vox Day, a right-wing extremist with a massive following and a history of really nasty racism. Rabid Puppies aggressively promoted its own slate of 'overlooked' materials, with some Sad Puppies 3 overlap, and quite a few items from Beale, his firm Castalia House, and his good buddy Wright. Wright walked off with six nominations (later reduced to five when one was found to be ineligible AFTER it 'won' a place on the Hugo nominations list). A good chunk of Wright's 'winning' work is, in my candid opinion, terrible. We're talking execrable, plotless message fiction that some consider unpublishable, let alone Hugo-worthy. Remember, the Hugos are the biggest awards in SFF. The equivalent is Kirk Cameron's Saving Christmas getting an Oscar nod.

At this point it should be fairly clear that there's overlap between the Sads and the Rabids; that it's remarkably easy to tar them all with a single brush; that there are incentives for the more reasonable voices and arguments to just sort of go along with the extremists; and that this is a perfect example of a cause growing away from its founding ideals.

Now we go to the other side of the fence. At the more sensible, civil end of things, we have George R.R. Martin and a host of other voices. Martin's taken about a week out of his life to write about this stuff, give historical background, and engage point-by-point with Correia. At the more vicious and radical end, we've got people like Teresa Nielsen Hayden, an editor at Tor - and she's got plenty of company. This side of things includes folks who want 'No Award' to sweep every category at this year's Hugos.

So who came out of this looking good? Not many. Having read what I've read on both sides, and changed my mind more than once as more facts came in, I'd say Martin, Correia to some extent, Torgerson to some extent, Jim C. Hines (always a class act), Mary Robinette Kowal (who's led a movement for writers to buy voting memberships for people on both sides who want in on the debate where it matters) and a guy named Mike Glyer who's been doing SFF news and faithfully linking to editorials on both sides for the duration of the fight.

Nutshell time: a bunch of someones hijacked the science fiction and fantasy field, some to make a point, others to make a buck. The backlash is overkill. The lines are drawn and nobody knows what happens next. The pipe dream is that the quickly rising numbers of voting members will actually read the nominated works and make informed decisions based on quality rather than ideology. 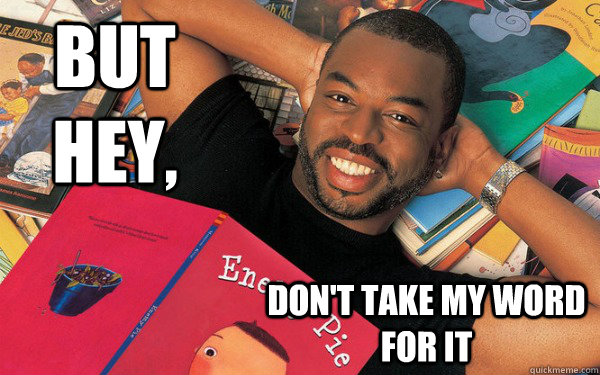 'Moderate-ish'
file770 - Mike Glyer's SFF publishing news aggregator, with links to, and quotes from, a ton of arguments on both sides. Includes lots of links comparing the 2015 finalists with both puppy slates, reviews of the actual works in question, etc.
Jim C. Hines' blog

'Anti-Puppy':
Not A Blog - George R.R. Martin's LiveJournal. The last week's worth of posts are required reading for understanding Puppygate/Pupfail. Martin happily shreds arguments from both sides, and addresses plenty of the 'proposed solutions' - all of which suck to one extent or another.
Making Light - The Nielsen-Haydens' blog/side. There's some nasty stuff in here.
Whatever - John Scalzi's blog